Controlling factors of ecosystem and soil respiration in a xeric shrubland in the Chihuahuan Desert, Mexico

In the terrestrial carbon cycle is very relevant to identify the influence of soil in the CO2 released to the atmosphere, which is linked to multiple biotic and abiotic drivers. Arid ecosystems dominate the trend and interannual variability of the land CO2 sink. This pattern is mainly controlled by temperature, precipitation, and shortwave radiation. Thus, these environments are characterized by a wide variability of water availability, which causes the CO2 efflux to be highly variable in time, challenging our model capacities. This study aims to understand the ecosystem CO2 fluxes and their controlling mechanisms from the Chihuahuan Desert in Northeast Mexico. We explore the average contribution of the Rsoil (1.30 mmol m-2 s‑1) to Reco (1.76 mmol m-2 s‑1), while identifying the controlling mechanisms of both on an annual scale. The structural equation model constructed showed a good f it for the data, explaining 50% and 93% of the annual variance of Rsoil and Reco, respectively. According to this model, Rsoil was mainly controlled by the air temperature, and Reco by soil water content. Unexpectedly, vapor pressure def icit was the most weight variable with a direct negative effect on Reco, supporting the idea that the vegetation component has a crucial role in the CO2 efflux of this ecosystem. This study highlights the importance of include multiple factors in the models of the C cycle. 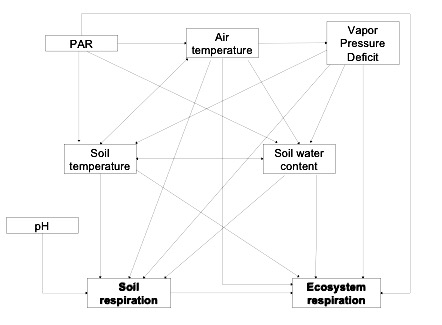