The integral watershed management requires an adequate characterization to identify related environmental problems and, consequently, to establish the pertinent solution guidelines. This study describes in detail the morphometric and hypsometric characteristics of El Salto watershed, Durango. This research was conducted by using a “Geographical Information System” which was strengthened with field data, shape parameters, relief and the hydrographic network were analyzed. In addition, the hypsometric curve was performed, and the hypsometric integral was calculated to determine the evolutionary phase of the watershed. The results suggest that the watershed is elongated; in addition, the relief shows a low slope (303 m) with an average slope of 2.23%, it considered moderately inclined. The drainage network is considered as fourth order; it is formed by 94 channels with a 90.53 km total length. Density and intensity drainage showed values of 2.02 km/km2 and 1.04 km, respectively, with a current frequency of 2.09 channels/km2; these are considered low values for watersheds with these dimensions. According to the value of the hypsometric integral (0.5), the watershed is in an equilibrium or maturity phase. The prevailing order of currents is 1, thus, the watershed is more susceptible to water erosion during rain events. On the other hand, due to the elongated shape of the watershed, it should be less susceptible to flooding, however, low values in density and intensity of drainage and frequency of currents were observed, it suggest that the runoff is not efficient. This study will be useful for the development of projects focused on management and conservation of natural resources, especially those aiming to reduce the loss of soil by erosion and to prescribe actions to water catchment. 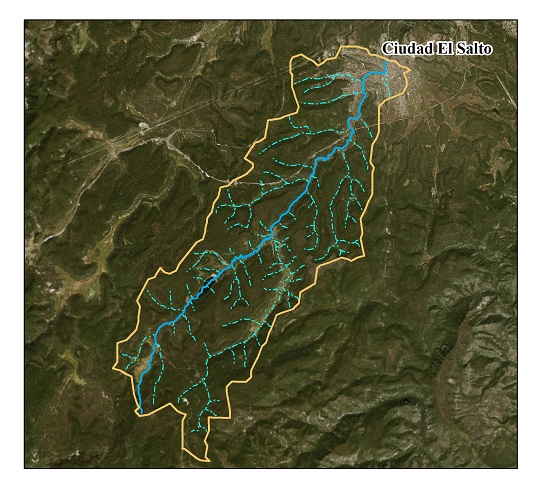