The backyard of Tlaxcala. An approach to its composition

The backyard is an agroecosystem located near the home and fulf ills several functions and provides various services; in addition, one third of the Rural Production Units in Tlaxcala have this agroecosystem. In the mexican state of Tlaxcala, México, the primary sector is the one that contributes the least to the gross domestic product; it is divided into 60 municipalities and 66% of its territory is used for agricultural, livestock and forestry activities and little is known about this agroecosystem. The objective of the research was to make an approximation of its composition with respect to the plant and animal species found in the backyard. The Registry of Agricultural Producers of the State of Tlaxcala, Mexico, carried out by the National Institute of Statistics and Geography (INEGI) was used; as a member of the work team, a copy of the original database was obtained informally, which consisted of a total of 53 968 basic information cards; of that total, 17 236 reported backyard activities. The information was analyzed using frequency tables of data grouped and sorted into classes for both plant and animal species. Regarding the composition of the main vegetable species produced in the backyard, fruit trees such as peaches and corn stand out. Of the animal species produced, cattle and poultry are the most produced. On average, 91.15% of what is produced in the backyard is for self-consumption; the average area of the backyard was 215 m2. The composition of the Tlaxcala backyard was determined in terms of plant and animal species of certain economic importance; the results reported here can be useful for other research that continues with the characterization of the structure, composition and functioning of the backyard in the state of Tlaxcala. 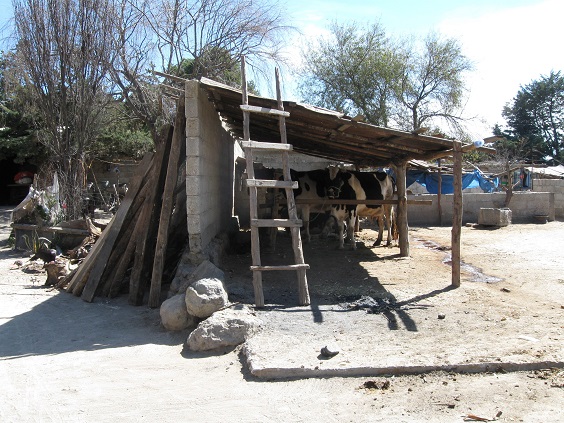