Evaluation of biodiversity in a farm in agroecological transition

A study was carried out at the in agroecological transition El Renacer farm, in the Perico municipality, Matanzas, with the objective of evaluating the functionality of some of the components of ecological biodiversity and the sustainability of its economic dimension. The farm has a total area of 43.5 ha; 40 of them dedicated to livestock. The rest is dedicated to crops (0.5 ha), fruit trees (1.5 ha), forestry (1.0) and facilities (0.5 ha). The functionality of biodiversity was evaluated, based on an analysis model that included the components: tree diversity, production diversity and species richness. Through a diagnosis, which included tours, semi-structured interviews and observation, the number of individuals of each species was quantif ied, which were characterized according to their functionality within the system. For the calculation of economic sustainability, the indicators were standardized and weighted according to their importance. Shannon’s indices for tree diversity (2.06) and Margalef’s for species richness (4.50) demonstrated that the system can be considered as high species richness and sustainable, while the diversity index production (1.46) showed that the farm is not self-sufficient, from the point of view of the development of the agricultural subsystem. The economic dimension reached a value of 3.56, close to what was expected for a sustainable farm. In a general sense, the values of the indicators of diversity of the agroecosystem were optimal and demonstrate its functionality, represented by diversif ication and agriculture-livestock integration, although it is recommended to expand the area destined to agricultural crops, to achieve greater self-sufficiency food. 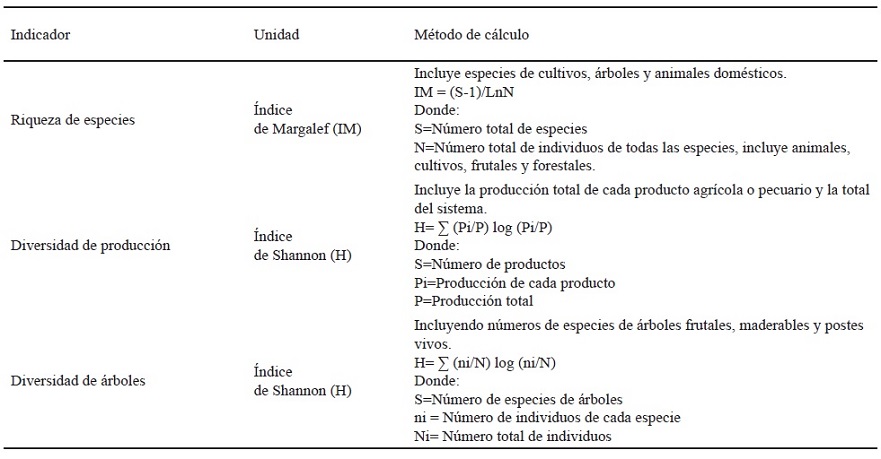