It is necessary to update the technology on the agronomic response of new wheat varieties in relation to agro climatic conditions in order to provide alternatives with higher yields and grain quality. The objective of the study was to test three types of soil in the northwest of the state of Chihuahua for the following wheat seeds: Rayon-F89, Roelfs-F2007, Norteña-F2007, Cachanilla-F2000, Delicias-F81, Kronstad-F2004 and Luminaire-F2012. The experimental design was completely randomized with five replications; where the experimental unit was one m2 and the means were separated with the multiple comparison by Tukey test at 0.05. The agronomic practices were in accordance with those of the farmer's management. The data registered of the following variables were protein content in grain, plant height, grain moisture, test weight, ear length, and grains per ear, grain yield and total biomass. Relevant results regarding grain yield by soil type were the Rayón F-89 variety with 9.32 Mg ha-1 at El Camello site (Calcisol soil); the Kronstad variety with 7.9 Mg ha-1 at the El Capulin site (Vertisol soil); and the Roelfs variety with 11.3 Mg ha-1 at the Placitas site (Fluvisol soil). No significant effect was detected between varieties for test weight. Grain protein content varied from 10.4 to 16.7%, where the Delicias variety had the highest content in Fluvisol soil, that is, the effect of the variety was more important than the locality for protein, while for humidity the locality influenced more. The Kronstad, Roelfs and Rayon varieties are suggested for the production areas in the northwestern part of the state of Chihuahua. 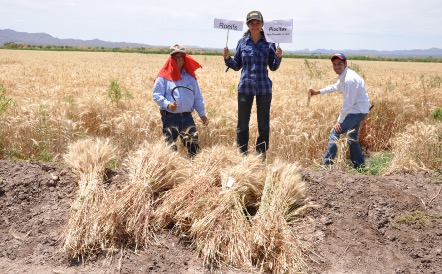