Nitrogen use efficiency of nitrogen use in agriculture is very low, causing environmental problems and low crop productivity, therefore, knowing the spatial and temporal distribution of biophysical variables such as the fractional vegetation cover (FVC) and the canopy nitrogen content (CNC) of the crops will provide valuable information to improve this condition. The use of freely accessible satellite imagery, such as Sentinel-2 (S-2) images, can facilitate this task. Due to the above, a study was carried out in six corn plots grown by producers in Texcoco de Mora, Estado de Mexico. The first objective was to investigate the relationship between spectral indices, estimated from the reflectance measured with a multispectral radiometer at surface level and S-2 images, with FVC, estimated by digital photographs through the Canopeo mobile application. The second objective was to obtain a linear model that estimated the CNC from the analysis of different spectral indices. Two models were generated to estimate FVC, from the radiometric information at surface level, their validation yielded a high value of R2 = 0.92 and a RMSE = 7.3% between measured and estimated FVC data; however, in the case of the data estimated with S-2 images, lower values of R2 = 0.67 and RMSE = 17.6% were obtained, which was attributed to a possible effect of the atmosphere, since the study period coincided with the rainy season. Finally, to estimate the CNC, the best results were obtained with the model generated from ClGreen, in which an R2 of 0.91 and a RMSE of 0.63 g m-2 were obtained, when comparing the CNC measured in relation to the estimate. 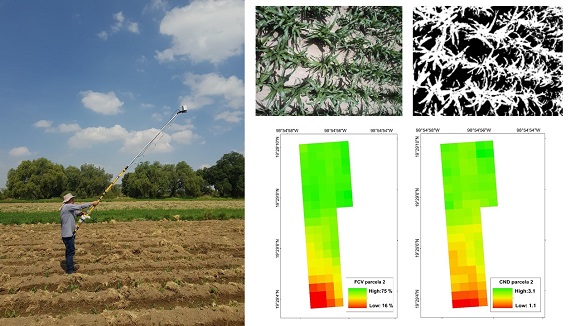