Forage quality is important since it intervenes in aspects related to animal nutrition and productivity and in environmental effects such as methane generation (CH4). Forage quality is determined by a bromatological analysis, which measures variables such as: dry weight (DW), crude protein (CP), acid detergent fiber (ADF), neutral detergent fiber (NDF) and ash. Thus, the objective of this study is to evaluate the effects of drinking water and two nutritional solutions with different nitrate/ammonium (NO3-/NH3+) ratios on fresh weight (FW) and bromatological quality of hydroponic green forage (HGF). Oats (Avena sativa) and barley (Hordeum vulgare) were sampled at 5, 10, 15, 20, 25 and 30 days after planting. The variables FW, DW, CP, NDF, ADF, and ash were measured. For the statistical analysis, a 3×2 factorial model (three nutritive solutions and two seed species) was used with repeated measurements over time and Tukey’s comparison of means (P ≤ 0.05). According to the analysis of variance (P ≤ 0.05) (i) time had significant effects on all the variables studied; (ii) nutrient solutions only affected CP; and (iii) the species used had an effect on CP, NDF, ADF and ash. Consistent with the comparison of means, (i) an increase in value of all variables was observed as sampling time progressed; (ii) CP percentage was higher with nutritive solutions than with drinking water, but no difference was observed between solutions; and (iii) hydroponically-grown (HGF) oats had higher CP, NDF, ADF and ash values. To conclude, HGF oats has better nutritional characteristics for livestock than HGF barley. 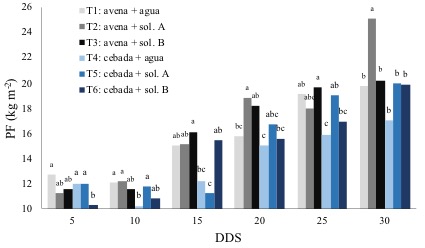